THE RIGHT TO ROAM (RESPONSIBLY)

We have not been birding for sometime and so it was very nice to get out with an object in mind. San Pedro del Pinatar is a large area of Salinas on the Murcia Alicante border and it has in past years held some interesting species, but in recent times has yielded very little. So, I am not a frequent visitor.
On rarebirdspain  Falaropus `Picogrueso/ a Grey Phalarope was recorded on 30th November and again on 3rd December. It has to be worth a look.
We went to the large car park and here was saw three Spoonbill - Espátula Comun with one just close enough for Nikon P900 to get a decent photo. On one island was one Lesser Black Backed Gull - Gaviota Sombría and close by were four Ringed Plover - Chorlitejo Grande. On a small muddy shore there about 10 Dunlin. This is the most number of species I have seen here for sometime and it appears that I should go again. 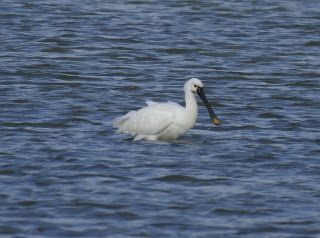 In the vegetation on the edge of the car park were 10 caterpillars which we have to identify and also the plant that they were. Plantnet was not definite enough and another visit might produce the correct answer. 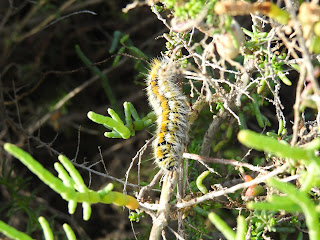 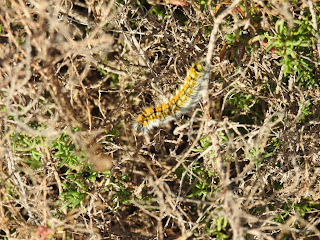 Moving back inland I spoke to a Spanish Birder who was scoping the large areas of water searching for the Phalarope. It has not been seen for a few days.
We moved to the small car park by the roundabout where we had one Ruff - Combatiente feeding with several Dunlin - Correlimos Comun and a possible Little Stint - Correlimos Menudo 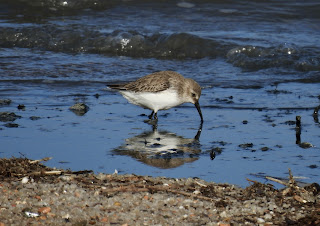 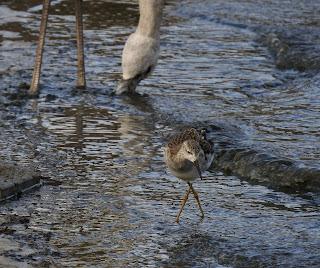 Gamebirds and avian flu: Defra decided not to introduce any restrictions on the release of large numbers of gamebirds into the countryside at a time of unprecedented threat of avian flu to commercial flocks and wild birds. Now they face a difficult decision about whether or not to allow shooting estates to take 'wild' gamebirds back into captivity to form part of next year's breeding stock. We guess that Defra won't introduce any regulation on shooters at all. We have written to Defra asking them what they are going to do - click here.

If you like what we do and would like to make a general donation which will be used across our range of work, then please consider donating through PayPal, bank transfer or a cheque in the post - see details here.

That's it for now. Thank you so much for your support on campaigns and in funding legal challenges. We couldn't do any of this without you.

GOOD WORK BY THE HUNT SABS

THIS IS VERY SERIOUS READING AND WITH CREDIT TO THE HUNT SABOTEURS. THERE HAS BEEN SO M UCH KILLING IN OUR COUNTRYSIDE AND THE SABS HAVE DONE MUCH TO REDUCE IT.

This is the latest from the Hunt Sabs

It’s been two years since the hunting world was rocked when the Hunt Saboteurs Association publicised the now infamous leaked Hunting Office webinars, in which key figures in the hunting world were seen discussing ‘trail laying’ as a smokescreen for fox hunting, dealing with sabs and the police, and a host of other topics they would prefer to have kept secret.

It didn’t take long for the story to hit the mainstream media, with hunting’s post-ban facade slipping and the public seeing the deception of ‘trail hunting for what it really is.

The fallout was huge. Major landowners that had previously allowed ‘trail hunts’ on their land suspended this activity. Within the hunting community, many blamed an out-of-touch leadership at the Hunting Office for damaging hunting and ruining things for those who enjoy it.

In October 2021, Mark Hankinson – director of the Hunting Office and star of the leaked videos – was hauled before court and found guilty of intentionally encouraging or assisting others to commit an offence under the Hunting Act 2004. Although the conviction was eventually overturned, the damage to hunting was done. One of the most obvious measures of this damage is the number of hunts that have merged, ‘gone legal,’ or have simply ceased to exist since the webinars.

Loss of huntable country is a major contributing factor. Whether it’s changing land use, creeping urbanisation, or landowners no longer wanting wildlife criminals on their land, hunts are being hit hard – and right across the countryAnd when big landowners, such as the National Trust, Forestry England, or Natural Resources Wales stop allowing hunts on their land, as they have since the webinars were released, this can be a big problem!

The New Forest Hounds, a long established and well supported fox hunt whose country was almost entirely in the New Forest (most of which is managed by Forestry England), this year became a bloodhound pack – hunting a human runner.

The Banwen Miners Hunt have taken a similar decision, after losing Natural Resources Wales land, with other Welsh packs – the Ystrad Taf Fechan Hunt and the Tanatside Hunt – both disbanding.

The Tetcott Hunt in Devon have also disbanded, while the North Ledbury, North Herefordshire and Clifton-on-Teme Hunts have amalgamated to become the Herefordshire & Clifton Hunt. Another notorious hunt – the Crawley & Horsham – have all but disbanded after decades of being sabbed

And it isn’t just fox hunts. A number of hunts who traditionally hunt hares have also gone the same way.

The North Norfolk Harriers have folded, the Easton Harriers in Suffolk have become the Hamilton Bloodhounds hunting a human runner and, on the opposite side of England, the Ross Harriers in Herefordshire have opted to hunt a drag.

In 2020 the Palmer Marlborough Beagles (formed from a merger of two hunts in 2007) amalgamated with the Clinkard Meon Valley Beagles (another hunt born from a merger), essentially rolling four hare hunts into one!

This summer, the Blean Beagles in Kent, who have come under major pressure from hunt sabs over the years, have merged with the Brighton, Storrington, Surrey & North Sussex Beagles – forming a huge country that encompasses much of the southeast!

The Albany & West Lodge Basset Hounds in eastern England threw in the towel completely in 2021, as did Scotland’s Barony Bassets and Norfolk’s Eastern Counties Mink Hounds.

On top of that, the Cheshire Beagles WANT to close down, but the higher-ups in the hare hunting world won’t let them, with the outsiders attempting a hostile takeover to keep the pack going.

WILD JUSTICE AND THE QOODCOCK PETITION

Woodcock petition: it may seem that this petition has been around for ever! We started it in July and it still has just under 2 months to run. We have now passed 72,000 signatures and we are speeding along towards the 100,000 signature target which will secure a debate in the Westminster Parliament..

We're asking for the shooting season for this UK Red-listed bird only to start on 1 December - not on 1 October (1 September in Scotland). Some shooting organisations say something similar, but they rely on the goodwill of shooters - we want to see this put into regulation and we, with your support, have already shifted Defra's position on this. They've agreed to review shooting seasons, so that's a start.

1 October was a long time ago! 1 September was even longer ago. Someone called Boris Johnson was UK Prime Minister on 1 September, and Liz Truss held that position on 1 October. Throughout those long weeks people have been shooting Woodcock and we don't think that is right.

Have a look at which parts of the country the signatures come from - click here.

Please sign the petition if you haven't yet done so - thank you. And now think of who else you can get to sign it too. Is there someone else in the house with you right now who might sign? Someone you're meeting today at work or for a coffee or a beer? Maybe you could forward this email to some friends and they'll sign too?  Every signature will help us reach the 100,000 signatures and help get a better deal for Woodcock.

(I HAVE LIFTED THIS FROM THEIR SITE)

Cumbria’s Melbreak Foxhounds chased a fox onto a householders roof last Wednesday 9th November. The hunt had already been reported to the National Trust for trespassing on their land at Whiteside near Lorton, before pursuing the terrified animal on to private property.

Hunt personnel then trampled all over the private residential property in an attempt to retrieve their hounds. During the incident, hounds actually entered a resident’s house, greatly traumatising both the residents and the family dog.

The Melbreak Foxhounds are one of six fell packs who hunt on foot across Cumbria’s wild and remote Lake District. Following the infamous Hunting Office Webinars – in which trail hunting was shown to be a smokescreen for traditional hunting – these hunts were banned from both National Trust and Lake District National Park Authority land. However, all the fell packs regularly trespass in these areas, seemingly without consequence from the National Trust or LDNPA.

This appalling incident provides yet more evidence of two things we already knew. Firstly, trail hunting is a sham, designed to disguise the illegal hunting of foxes. Secondly, the Cumbrian fell packs are a law unto themselves, repeatedly trespassing on property and intimidating anyone who gets in their way. Fortunately, there are two HSA-affiliated hunt sab groups in the area who are incredibly effective at stopping the fell fox hunters.

NB I HAVE NOT INCLUDED THE PHOTOGRAPHS. SO PLEASE

Pageviews from the past week

John
I was brought up in the very rural county of Herefordshire and that is where my roots still remain.Wildlife was all around me and this created the interests that I have to this day. Unfortunately work got in the way but now I have more time.One of my main interests is in writing poetry and short stories. I am a member of Stanza Mar Menor, San Miguel Writers and The Poetry Society in London, There is so much to see and do.